Signs and Symptoms of Methadone Dependence

Methadone dependence for many individuals has become a byproduct of dependence on other opioids and for some it has become a primary drug of choice. Although methadone used in treatments for opioid addictions should not be considered a substitute drug, the fact remains that many opioid users will alternate between methadone and other opioids when one or the other is unavailable.

For the treatment of pain, methadone should be reserved for use in chronic and severe pain conditions such as those that occur in AIDs or cancer patients. Most of the signs and symptoms of methadone dependence resemble those of potent opioids like heroin, morphine, and Oxycontin, but, because it works differently, methadone dependence may be even more difficult to treat.

Methadone works differently than other opioids in that it has a longer half-life than short-acting opioids like heroin, morphine, and other prescription opioids, with effects lasting 24 to 36 hours or more. With a higher affinity or power to remain attached to opioid receptors in the brain, methadone can critically slow breathing and heart rate. Depending on the person’s health, metabolism rates, patterns of use, and other factors, methadone can remain stored in bodily tissues for days. For these reasons, methadone can be very dangerous drug if used in the wrong ways.

While federal regulations for methadone uses in the treatment of opiate addictions remain restrictive, prescriptions for pain are less so and contribute to a majority of overdoses and deaths from misuse of the drug. According to the CDC, “Methadone remains a drug that contributes disproportionately to the excessive number of opioid pain reliever overdoses and associated medical and societal costs.”

Methadone activates all opioid receptors in the brain and central nervous system the way other opioids do producing euphoria and sedation in high enough doses which increases the dependency and abuse potentials. In appropriate doses, these adverse effects can be mitigated once the person becomes adapted to the drug which makes it very beneficial when used to treat opioid addictions.

Methadone dependence can occur within just a few days. It usually takes about 3- 5 days before the person experiences any negative symptoms of withdrawal by attempting to cease use. Typically, the higher the doses and the longer it is used, the more physiological adaptations there will be. The following are the most common signs and symptoms of methadone dependence. 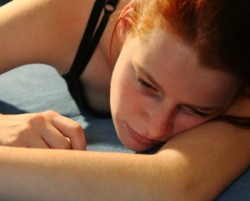 If you are experiencing a tolerance to methadone or get withdrawal symptoms from it you may be dependent.

Tolerance is the brain’s way of adapting to the presence of methadone and begins the stages of dependence where the person becomes used to the effects such as diminished euphoria and sedation. Signs of tolerance are the needs to consume higher amounts of the drug to get high, relieve pain, or gain relief from cravings and withdrawals when detoxing from other opioids.

In an opioid treatment program (OTP), daily methadone doses keep a stable chemical balance in the brain while blocking the euphoric effects of short-acting opioids, helping to deter their abuse once a cross-tolerance to those drugs is achieved. Methadone tolerance building slowly declines over time and a steady state of dosing can maintain the person in the OTP program indefinitely with equal amounts of methadone ingestion and elimination through bodily waste.

Methadone withdrawals are the negative symptoms a person experiences when they suddenly reduce or stop using methadone after developing a dependency to the drug. A person dependent on methadone will show signs of their compelling needs to use methadone to avoid or alleviate the psychological or physical withdrawal symptoms that may include:

To reduce the impact of these withdrawals, a gradual reduction in dosing is required.

Preoccupations with the methadone use and behaviors are symptoms of methadone dependence that can occur as a result of the pleasurable effects methadone produces, especially when abused in high doses. The more often methadone is used, the more conditioned cues the brain will retain to reinforce the behavior as one that bears repeating again. This is a natural process of opioid dependency because of the way methadone and other opioids interact with opioid receptors and the “reward circuits” of the brain. According to the Institute of Medicine (US), “Drug dependence has long been associated with some perturbation of the brain reward systems.”

Signs of methadone dependence include increased reliance on the drug to feel good, to perform daily activities, to relieve unwanted emotions, or to cope with distressful circumstances. These unhealthy behaviors tend to perpetuate increased abuse of the drug which can be highly dangerous. Methadone should never be taken more than once a day without express recommendations from the qualified physician who is supervising the methadone use.

Overdose is a sign of methadone dependence that doesn’t always have to be a result of abuse of the drug. It can happen to anyone who has compromised health issues, uses other substances such as alcohol or other medications, or takes the methadone before the previous dose has been fully metabolized. According to the CDC Methadone’s “primary disadvantages are its long and unpredictable half-life and associated risk for accumulating toxic levels leading to severe respiratory depression; its multiple interactions with other drugs, including frequently abused drugs such as antianxiety agents; and its ability to cause major disturbances of cardiac rhythm.” Call 800-891-9360(Who Answers?) toll free anytime for help finding treatment.