Home / Articles / How Long Does Methadone Stay in Your System?

How Long Does Methadone Stay in Your System?

Methadone is a great treatment for opioid addiction. It can help you fight back against a number of different drugs, including heroin, codeine, oxycodone, and more.

How does methadone accomplish this level of prevention?

One reason is because methadone stays in your system for such a long time. With long-lasting potency, methadone can protect you from the influence of other drugs for longer.

This also means that you don’t have to head back to the clinic multiple times a day to get your dose. A simple, once-a-day visit is all you need.

Not on methadone currently but want to get started? We can help with that. 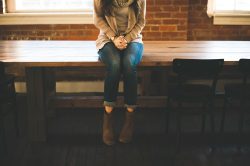 Methadone stays in your system for much longer than the effects last.

In order to measure how long a drug lasts in your system, scientists created the term “half-life.”

The half-life of a drug is the amount of time it takes for the amount in the body to be reduced by 50 percent. In order words, your body has eliminated and used up half the drug.

The half-life for every drug is different, as your body handles all drugs differently.

However, for methadone in particular, the half-life is rather long.

It can actually be between eight to 59 hours, depending on your metabolism, weight, or other factors.

The half-life of other common opioids are:

For example, if you’re taking methadone as a method of pain relief, it will only last for four to eight hours at a time.

After this period, you might not feel the methadone in your system anymore, but it will still be present.

Because of methadone’s long-lasting duration, it can actually show up in a urine test quite a while after your last dose.

In fact, small particles or remnants of methadone, known as metabolites, can be detected in a urine test up to three days after your last dose of the drug.

It only takes three to eight hours after taking methadone for it to show up.

This is typically a bit longer than other opioids, such as:

Methadone in the Liver

Blood and urine aren’t only places in which methadone can be found in the body.

If you’ve been taking methadone for a long time, your liver also might be storing the drug.

Over time, your liver slowly releases methadone, helping to increase its duration of action even if it doesn’t have a large presence in your bloodstream.

As you can see, just how long methadone lasts in your body varies depending on how long you’ve been taking it and how much you’re taking.

However, the important thing is that it works for whatever opioid addiction you’re struggling with.