Home / Articles / Will Methadone Make Me Fail a Drug Test?

Will Methadone Make Me Fail a Drug Test?

Getting treatment for your drug addiction is a great way to reclaim your life. Through the help of counseling, group meetings, and medications like methadone, you can wean yourself off of drugs and become a member of society once more.

However, you might have some hesitation about using methadone in the process. What if, after all your hard work, methadone causes you to fail an important drug test? Because many employers use drug testing as a means of applicant screening, you might be unable to get a job to support yourself.

Methadone is a medication that can be used to help a person get off of their opiate addiction. It works by binding to the opioid receptors in the brain without producing the euphoric side effects of other drugs.

Additionally, it prevents other drugs from getting you high as well as eliminates most withdrawal effects.

Methadone works so well because it is a synthetic opioid receptor drug. This means that it is not made using natural alkaloids from opium poppy resin.

Feeling scared about taking methadone? Don’t worry, as we are here to calm your fears. Just call us at 800-891-9360(Who Answers?) to discuss your concerns with one of our knowledgeable representatives.

How Do Drug Tests Work? 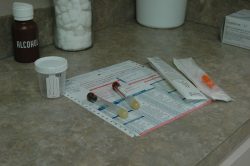 Usually methadone won’t show up in a drug test.

There are two main types of urine drug tests – the enzyme linked immunoassay (EIA) and the gas chromatography/mass spectrometry (GCMS).

Generally, an EIA is what is used to detect illicit drug use. They will contain specific antibodies and metabolites of common drugs, which is how these drugs are detected. It is the most commonly used test, as it is the cheapest and fastest.

However, an EIA will not be able to detect a specific drug in your system. It will only detect the class of drug.

While it’s more expensive, GCMS is much more accurate.

Catching Methadone on a Drug Test

So, back to the original question – will methadone show up on a drug test?

Because methadone is a synthetic opioid, it varies from natural opiates. This means it won’t be detected on a normal EIA or GCMS test, because these generally are looking for natural opiate abuse, such as heroin, codeine, or thebaine.

However, this doesn’t mean methadone is impossible to detect. If the lab is requested to specifically test for methadone, it can easily do so with either a EIA or GCMS.

Methadone Maintenance Treatment & Employment: What Are My Rights?

In rare cases, methadone can cause false negative or false positive results for other drugs.

For example, if you are taking the drug Seroquel for bipolar disorder, Thorazine for schizophrenia, or even a high dose of ibuprofen, it can sometimes show up as methadone on an EIA or GCMS test.

As you can see, there is a very slim chance that taking methadone will interfere with any drug screens for employment or other purposes.

Even if methadone is detected, by simply explaining that you are in recovery from a terrible addiction, any reasonable person should be willing to make an exception.