Home / Articles / Can I Mix Methadone and Alcohol?

Can I Mix Methadone and Alcohol?

Methadone is a long-acting synthetic opiate that produces similar effects to other opioid drugs in milder and more gradual way. Methadone can be very beneficial for treating chronic pain. When combined with counseling, drug monitoring, and other resources, it has also been proven effective in the treatment of heroin and opioid addictions by suppressing withdrawals, reducing craving, and blocking the effects of other opioids. Like heroin, methadone users can develop a tolerance which can leads to dependency and addiction and withdrawals from methadone are notoriously painful.

Methadone can be a tricky medication and its usage does come with some risks. Because methadone is long lasting and has a gradual onset, unintentional overdoses are a major concern. Methadone works 24–36 hours and abusers often think that the drug has worn off sooner than it really has. Abuse of methadone has serious health risks and has been linked to a growing number of deaths. Sadly, many users take so much methadone that they fall asleep and suddenly stop breathing, suffer cardiac arrest, or they vomit and die by asphyxiation. 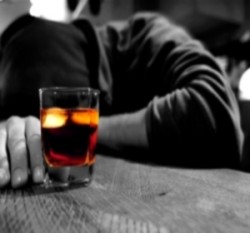 Mixing methadone with alcohol is dangerous.

It is never a good idea to mix methadone with alcohol. Methadone and alcohol are both central nervous system (CNS) depressants which have the ability to decrease breathing and heart rate. Combining the two is beyond dangerous, it can be fatal.

Methadone has a slow metabolism and its effects last longer than other opioid drugs. When combined with alcohol or other drugs, the mixture results in intensified and more potent effects. You may feel drunker or more euphoric, and at the least, your judgment becomes more clouded. Alcohol, like most substances, interferes with the metabolism of methadone and a normal dose can result in accidental overdose or methadone withdrawal depending on the whether the body metabolizes too much or too little. Mixing methadone and alcohol can make it difficult to achieve an adequate methadone dose and this can defeat opioid addiction recovery.