One of the ways in which methadone maintenance helps to treat those dependent on and addicted to opioids is by minimizing the withdrawal symptoms they would normally experience from the drug. According to the National Library of Medicine, the drug “works to treat people who were addicted to opiate drugs by producing similar effects and preventing withdrawal symptoms in people who have stopped using these drugs.”

Because methadone is an opioid––just like oxycodone, hydrocodone, heroin, and morphine––it causes similar effects to these drugs. It can reduce pain, cause relaxation, and in large doses, create an intense high. When the drug is used in methadone maintenance, however, the dosage given is not large enough to cause this high. Instead, an amount is given that produces many of the same effects as other opioid drugs, which allows it to minimize withdrawal symptoms, as the body is receiving the effects it craves. 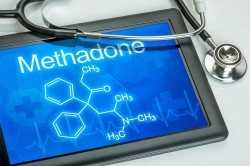 Methadone is an opioid, so is able to occupy the same opioid receptors that were once effected by the abused drug.

As stated by the National Institute on Drug Abuse, “Dependence develops when the neurons adapt to… repeated drug exposure and only function normally in the presence of the drug.” If a person suddenly stops taking opioids once they are dependent on them, withdrawal symptoms occur, causing them to experience pain and flu-like side effects. Methadone can help reduce these withdrawal symptoms because it is an opioid drug and able to bind to the same opioid receptors that are dependent on this type of substance.

When a person takes a high enough dose of methadone while they are dependent on opioids, their withdrawal symptoms will subside because the methadone dose is occupying the opioid receptors in the brain, allowing them to get the effects they need without abusing the drug. Over time, a person can eventually become stabilized on methadone and be able to work on balancing the rest of their life after they have stopped abusing opioids. Once their life is stable as well and they feel they are ready to begin withdrawal from methadone, they can slowly be weaned off the drug so they will experience as few withdrawal symptoms as possible.

Withdrawal symptoms are a reaction to the absence of a drug when one has become dependent on it. Especially if an individual has been abusing opioids and decides to begin treatment, it can be very difficult to go through withdrawal without any kind of medical assistance. Therefore, methadone minimizes these symptoms and treats the person for their addiction to and dependence on opioids, which helps them become stable until they are ready to live without the drug.

Methadone does not treat opioid withdrawal itself but it does reduce the severity of symptoms, sometimes even to the point where the individual does not experience them at all. This works to treat the larger issue of dependence, and, eventually, the individual can be weaned off the drug. It also works to treat opioid addiction through this method of use, giving the user the ability to focus on issues other than their withdrawal symptoms.

Does Methadone Treatment Get You High?

Methadone is an opioid agonist and, therefore, can cause euphoria like other opioids when taken at certain high doses. However, when used to treat opioid addiction and when taken as prescribed, the drug does not cause a person to get high. How Are the Euphoric Effects Avoided in Methadone Treatment? The euphoric effects of the ….

If you would like help finding a methadone clinic in your area or you have more questions about this program in general, call 800-891-9360(Who Answers?).